In this series, conducted in partnership with the Melbourne City of Literature Office, we discover some of the bookstores of the UNESCO Cities of Literature network.

Novi trg is one of the oldest squares in Ljubljana, with a history dating back to the early 1300s. “What was once a fisherman’s wharf and later a dilapidated parking lot is now a beautiful and social gathering place. lively accompanied by the smells of good coffee, the sounds of water fountains and views of Ljubljana Castle in the sun, ”explains Barbara Filipic. and Tamara Mateša. The duo is a bookseller at Azil—A store that is proud to call the square house. “With the Ljubljanica river on one side and the monumental National Library on the other, it is undoubtedly one of the most picturesque areas of the city. Again, we may be a bit biased. But only a little.

Azil is the first Slovenian university bookstore specializing in the humanities and social sciences, and is part of the Slovenian Research Center of the Slovenian Academy of Sciences and Arts. The store has a special emphasis on philosophy, sociology, anthropology, history and art history, as well as political science, economics, political economy and environmental, gender and feminist studies. “We store scientific publications from the ZRC publishing house, as well as books dealing with subjects in the aforementioned scientific fields published by other Slovenian publishers,” the team explains. “We are particularly proud of our ever growing and exceptionally current collection of books from all major foreign (mainly Anglo-Saxon) university presses and other scientific publishers.”

One of the many reasons the City of Literature Ljubljana office suggested Azil was the way he makes research more widely available to the public. “Scientific research centers are generally more closed,” says Ljubljana City of Literature’s Damjan Zorc. It highlights their wide range of books, both local and foreign, as well as their program of events and presentations, and the fact that they are unique to Ljubljana in that they are a hybrid bookstore and café.

The original store opened in 2003, and over the past 19 years it has moved several times. In its early days, it was the smallest bookstore in town, but it quickly grew, not only in size and popularity, but also in scope. In 2009, their project to incorporate an adjoining café was finally possible. “Now we may still be the smallest, but we’re also the most charming bookstore in town, if we can say it ourselves – small in size but big in the ideas our shelves carry,” explains the team. “We also remain the only book and coffee hybrid in town, confirming that good coffee and good books really go hand in hand.”

What Azil strives to do goes beyond just selling books – it’s about broader conversations and deeper engagement with people on the topics they specialize in. “We are constantly on the lookout for new titles and publications on hot topics and at the same time We also strive to be very present by engaging with our customers to try to best meet their needs. arouses our joy, it is to see the books that we offer arouse joy in others, ”they explain. 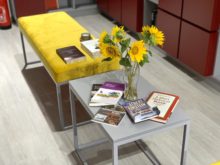 “Azil is more than just an in-house bookstore that sells and promotes the scientific publications of the ZRC publishing house. We regularly organize activities such as book presentations, debates and panel discussions in the bookstore as well as in the auditorium just down the hall. We are also frequently involved in the organization of other events such as congresses and conferences. ‘

What Filipic and Mateša love about the store are the people who make it what it is. “After all these years, we still remain completely enamored with the idea of ​​being able to create a safe space for all who care about science, progress, critical thinking, humanity and, after all, science. good literature, ”the couple said.

“During the winter months people make themselves comfortable on the sofas of the cafe with a good book and a hot drink and in the summer you can hear them arguing fiercely over a glass of wine on how to save the day. world. So our favorite aspect of our store is our community, the passionate, courageous and open-minded people who could one day do just that and make this world a better place, at least a little. ‘

Key words: The bookstores of the Cité des Lits

Mysteries in the Minnesota Wilderness